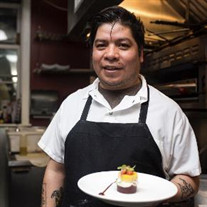 Adan Mendez-Trinidad, tragically passed away on October 5, 2021 at the age of 38. He was born April 4, 1982 in Puebla, Mexico. He came to the U.S. at the age of 12. He started his culinary journey at the tender age of 15 at La Campagne in Cherry Hill, and quickly worked his way through the ranks to head chef. His professional path took him to the kitchens of Alma de Cuba, Capital Grille, Water Works, and El Vez, to name a few. He was the right hand man for Richard Sandoval, and traveled from New York City to Denver everywhere in between honing his craft. In 2012, he signed onto the Pistola’s empire, with full reign of the kitchen, exposing the Philadelphia food scene to his full talents. He later co-opened Sancho Pistola’s and Pistola’s del Sur with his partners. By all accounts, Adan was not only a masterful chef, but a mentor. Social media accounts of Adan’s impact universally demonstrate that his selfless instruction and guidance were life changing for many. Adan’s mantra was to live life to the fullest, and to live each day like his last. He was as happy to break bread over steak tartare as he was over cheesesteaks. He did not believe in overindulgence. He was fiercely loved, and was kind to a fault. He will be dearly missed. He is survived by his fiancé Katie McCann, his princess Simone, his parents, Adan Trinidad and Lucia Mendez, his daughter, Leslie, his son, Antonio, his sister Maribel and his brother Anastacio. A Visitation will be held for Adan at Sacred Heart of Jesus Church, 1404 South 3rd Street , Philadelphia, PA 19147 on Wednesday October 13, 2021 from 10 AM to 12 Noon followed by his Funeral Mass. Arrangements were entrusted to the care of Rachubinski & Rogers Funeral Homes.

Adan Mendez-Trinidad, tragically passed away on October 5, 2021 at the age of 38. He was born April 4, 1982 in Puebla, Mexico. He came to the U.S. at the age of 12. He started his culinary journey at the tender age of 15 at La Campagne in... View Obituary & Service Information

The family of Adan Mendez-Trinidad created this Life Tributes page to make it easy to share your memories.

Send flowers to the Mendez-Trinidad family.