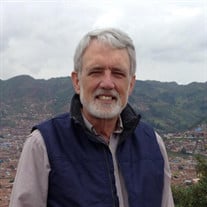 Cary Johnson Hansel Jr., 77, died on Monday, June 13, 2022 at Thomas Jefferson University Hospital in Philadelphia with his family by his side. He had been in Philadelphia attending a baby shower for his daughter, Sarah. Cary enjoyed spending time with his children and granddaughter; he followed his children’s careers with great interest and pride. In recent years, Cary took pleasure in the lake house in Pennsylvania that he and Sandra regularly shared with family and friends. Cary was born April 5, 1945, to Cary Johnson Hansel Sr. and Jeanette Cooper Hansel in Marion, North Carolina. Growing up in Falls Church, Virginia, Cary graduated from J.E.B. Stuart High School. He received his bachelor’s degree in chemistry from Washington and Lee University and his master’s degree in organic chemistry from the University of Mississippi (Ole Miss). Following graduation, he served in the Army as a First Lieutenant. Cary began his professional career with the U.S. Environmental Protection Agency. He then worked at Capitol Cement and ended his career at Rust-Oleum in Hagerstown, Maryland, where he served for many years as Plant Manager. After retiring, Cary fulfilled his dream of traveling and visited Cuba, China, Croatia, Peru and many other countries. He enjoyed auctions and antique markets. He was an avid and knowledgeable collector of antiques, coins, stamps and Civil War paraphernalia. Cary was an avid student of American history with particular interest in the Civil War. He frequently visited battlefields and other historic sites in Virginia, West Virginia, Pennsylvania and Maryland. He is survived by his wife of 54 years, Sandra, two sons, Cary III (Lisa) and Matthew (Elizabeth), and a daughter, Sarah (Neil Palmisiano) and a granddaughter, Harper. He is also survived by a sister, Nancy O’Conner (Paul) and numerous cousins, nieces and nephews. A Service of Remembrance will be held July 9 from 3 to 5 p.m. at Brown’s Funeral Home in Martinsburg, West Virginia. Arrangements were entrusted to the care of Rachubinski & Rogers Funeral Homes.

Cary Johnson Hansel Jr., 77, died on Monday, June 13, 2022 at Thomas Jefferson University Hospital in Philadelphia with his family by his side. He had been in Philadelphia attending a baby shower for his daughter, Sarah. Cary enjoyed spending... View Obituary & Service Information

The family of Cary Johnson Hansel, Jr. created this Life Tributes page to make it easy to share your memories.

Send flowers to the Hansel, family.