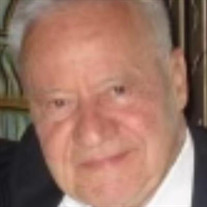 ALFANO, FRANK R. Age 88, passed away peacefully on April 13, 2021 with his beloved wife of 66 years, Marian J. (nee Rossi) by his side. Frank was a loving father to his children, Gaetan, Frank Jr., Linda Wray, son-in-law Steve Wray and daughter-in-law Kathleen McCarthy. Frank was a devoted “PopPop” to his grandchildren Michael Watsloff, Meggie McCarthy Alfano, Betsy McCarthy Alfano, Matthew Wray, Melissa Wray, Mallory Fanelli (Ryan) and great grandchildren Lily, Riley and Parker. He was a loyal brother to Dr. Anthony Alfano (dec’d Martha) and the late Nicholas Alfano (dec’d Mary). Frank is also survived by Jeannie Cassise, a close family friend who was like a second daughter, as well as many loving cousins, nieces, nephews and friends. Born in Philadelphia on January 22, 1933, Frank was the son of the late Gaetano Alfano and Mary Alfano (nee Perrino). He graduated from South Philadelphia High School in 1950 and from Villanova University in 1954 with a degree in Accounting. He later received his license as a C.P.A. and worked as an accountant, auditor and controller for several Philadelphia, New York and New Jersey businesses as well as individual clients. Frank treated his clients like friends and his friends like family. All who sought his advice entrusted him with many important issues that went well beyond the scope of accounting and finance. In addition to his professional career, Frank worked for decades as the home field statistician for the Philadelphia Eagles where he was able to combine two of his passions: football and figures. He was an avid Philadelphia sports fan who spent 82 of his 88 years living in South Philadelphia. Before moving to Delaware County, Frank and Marian were longstanding fixtures in their South Philly neighborhood, always ready with a smile and an open door for those who came to their home. Frank will be missed for his patience, kindness, integrity and the love he gave to those around him. Due to COVID, services will be private at this time. In lieu of flowers, donations can be made to the Norbertine religious order at Daylesford Abbey (Attn: Rev. Rossi) 220 South Valley Road, Paoli PA 19301, (Daylesford.org) or to a charity of your choice in Frank’s memory. Share Online Condolences at www.rachubinskiandrogersfh.com

The family of Frank R. Alfano created this Life Tributes page to make it easy to share your memories.

Send flowers to the Alfano family.