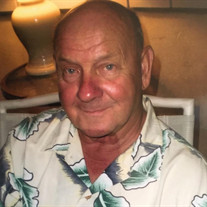 Ronald E. Borek, 76, passed away peacefully on Friday, August 11, 2017 surrounded by his loving family. Beloved husband of Lydia Borek (nee Carboni), loving father of David Borek (Ryan Manion), devoted grandfather of Maggie Rose, Honor Emma, and Travis Brendan. Ronald was predeceased by his son, Brendan and his parents, Charles Borek and Alfreda Hazewski Borek. Along with his family, Ron would never be found too far from his best friend, Michael Chambers. Ron graduated from Northeast Catholic High School and Villanova University. He went on to serve in the Army Reserves as a Sergeant. Always a of lover of cars, he had a 57 Chevy as a teenager and a Corvette while in college. Ron went on to own and operate several successful automotive businesses in Vineland and Cape May County, NJ. If you had the chance to know Ron, you loved Ron. He was always out and about and could be frequently found around Avalon enjoying a cup of coffee and engaging friends in conversation. Ron was also the go to man if you needed to know where to find the best cheesesteak in town. After the death of his son Brendan in 1991, Ron worked with his family to establish the Brendan Borek High Tides Memorial Fund which provides assistance to pediatric cancer patients in Atlantic and Cape May Counties and has raised several million dollars. Since 2015, Brendan’s legacy lives on through an endowed fund established at the Children’s Hospital of Philadelphia. Ron loved his grandchildren very much and joy would light up in his eyes whenever they came through the door. He will be truly missed by all. Visitation will be held at St. Brendan the Navigator Church, 5012 Dune Drive, Avalon, NJ 08202 on August 17, 2017 at 9:30 A.M. followed by Mass of the Resurrection at 11:00 A.M. Burial will be private. In lieu of flowers, the Borek family requests donations to Brendan’s Fund in support of the Brendan Borek Endowed Fund at Children’s Hospital of Philadelphia (CHOP) at P.O. Box 41, Avalon, NJ 08202 or www.brendansfund.org. Arrangements by THE RACHUBINSKI FUNERAL HOME OF QUEEN VILLAGE, 779-781 S. Front St. Share Online Condolences at www.rachubinskiandrogersfh.com

The family of Ronald E. Borek created this Life Tributes page to make it easy to share your memories.

Send flowers to the Borek family.